The Transpantaneira
5th September - transfer day to the Southwild Flotel
We rose very early today for breakfast at 5:30 and left at 6:00 to drive to the far end of the Transpantaneira where lies the small settlement of Porto Jofre which lies by the Rio São Laurenço. We stopped at various points on the way to bird. Highlights included 4 Southern Screamers, looking like a cross between  raptor and a turkey [2 of these comprised a pair with 2 chicks], 6 Maguari Storks and the beautiful Whistling Heron. At a roadside 'bush toilet' stop we had amazing views of an American Pygmy Kingfisher which provided an excellent photo opportunity and also there, was a huge bees nest hanging from a tree branch. Another stunner, sadly too distant for a decent photo, was the sight of two Scarlet-headed Blackbirds sitting atop a bush. I managed a record shot of one.
We eventually arrived at Porto Jofre where, after a few formalities and transfer of our luggage, we boarded an aluminium boat powered by an outboard, to zoom up the Rio São Laurenço [also known at the Rio Cuiabá on some maps] and then on to the tributary called the Piquiri and eventually pulled up alongside our permanently moored floating hotel, the Southwild Flotel, in time for a delicious lunch. We then had time to unpack and have a short rest to get over the long drive from Pousada Alegre. However we were soon back in action, boarding the launch to explore the extensive waterways in comfort. Many launches from various lodges ply the main rivers and backwaters and are in radio contact and it wasn't long before the message came through that a Jaguar had been spotted, so the throttle was opened, the nose of the launch rose up and we were zooming along on a mission! Very soon, stationary boats came in to view and then it was a case of killing the outboard and drifting gently up to the location, and there it was, out first magnificent Jaguar resting up under the trees on the river bank. Needless to say, the camera shutters were busy! Eventually he {I think I recall that it was a male} got fed up with being photographed and got up and ambled off into the undergrowth. {Looking at my notes I think we saw 2 Jaguars and it was the second one which was more obliging in that it was actually awake and posing}.

One of our 9 or so Jaguars
Naturally of course, there were many birds to see as well, plus Caiman and Capybara, these two latter being the Jaguar's favourite prey. The river Piquiri was quite wide in places and had many sandbanks which provided habitat for some interesting bird species, including Sunbittern right out in the open, plus impressive Large-billed Terns, looking rather like Caspian Terns with a bright yellow bill, the smaller, more dainty Yellow-billed Tern, Black Skimmers with their asymmetric bills, Spotted Sandpiper and the diminutive Pied Plover. Amazon-, Green-, and Ringed Kingfishers were frequently seen perched on riverside branches, and Great Kiskadees were common riverside perchers too, whilst Southern Rough-winged Swallows, Grey-breasted Martins and White-winged Swallows hawked for insects over the water. We continued cruising for the rest of the afternoon and as dusk approached, made our way back to the Foltel. On the way, we were impressed by many Greater- and Lesser Bulldog Bats as they hawked over the water, and also noted up to 6 Band-tailed Nighthawks. Back at the Flotel we had a superb dinner, then went through the day's bird list and had a interesting talk on Ocelots, before retiring to our comfortable rooms. 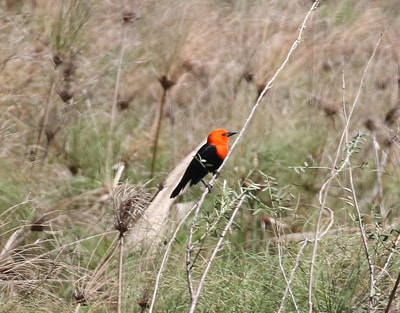 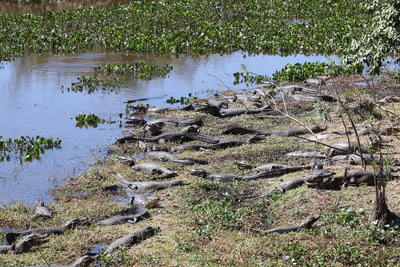 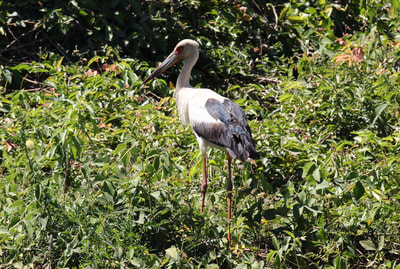 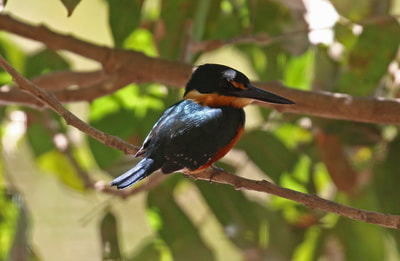 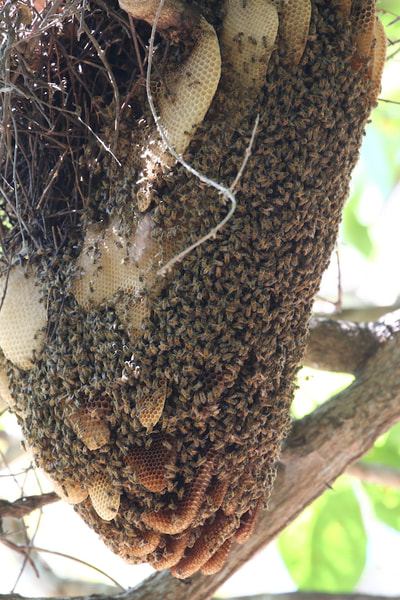 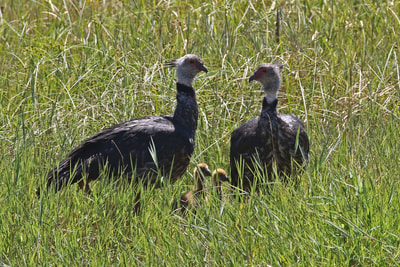 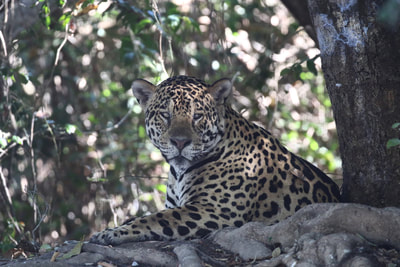 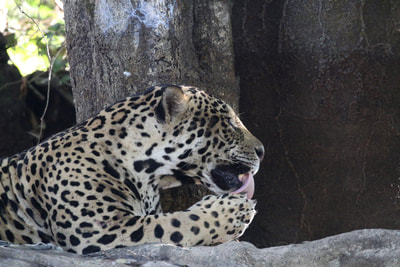